The Other Man in My Life

I've got another man in my life and I can't spend enough time with him.
I want to be with him every second.
When I'm away from him my heart aches.
I've really got it bad.

Then, when I go to bed I lay there and think about
how much fun we can have the next day.
I want to share all the good things in the world with him.
He is absolutely amazing!

I finally had to fess up to my husband and tell him.
He was not as devastated as I had thought he might be.
Actually he said he had already suspected that I had someone else that
I was spending all my time with.
He said he was okay with being in second place.
Wow, shocker huh?

Men aren't always as dumb as we give them credit for,
usually but not always.

Fortunately both of the men in my life know each other very well
and my husband really, really likes the new man in my life.
Said he totally understood why I felt the way I did since
the other man is such an awesome guy.
He's actually my husbands best bud.
Who knew, right?

I probably should tell you up front that he doesn't have a job,
but that's okay, I don't mind supporting him for awhile.

He does have fat feet, but hey, I can live with that.
He loves to sing to me and we dance all the time.
He does have two left feet and falls a lot when
he dances, but you know how it is, everybody
can't be a great dancer.

Let's see, oh yea, he loves to wear a hat.
He loves being in the pool, loves, loves, the water.
He pees in the pool sometimes but we all have accidents, right?

Let me think, oh yeah, he rides a big ole Harley.
He's not a very good driver, he ran into the fence last week.
But he still loves it.
(no injuries, just hurt his pride a little)

He's also great on the piano.
In fact he's so good he can even play the keys with his feet.
Seriously, I'm not kidding!

He's kind of a momma's boy, but I can live with that.

He hates, hates to have his photo taken.
He will do anything not to have his picture taken.
I do want to show you pictures of him but I mostly just have shots of his back.
Like I said,he's really camera shy.

He's pretty short too, only about 2 foot tall.
But he's really mature for his age.
Honest, he is.

Well, I guess my secret is out now.  You'll probably tell everyone in town.
Since you know so much already I may as well show you his photos.
Here he is, meet Jacob, the man of my life.

Jacob's back with his favorite hat on. 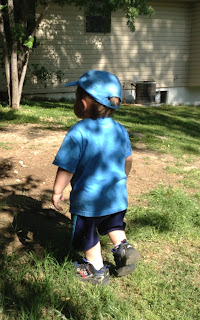 Jacob's back as he rides his Harley.  Unfortunately he fell off, it happens. 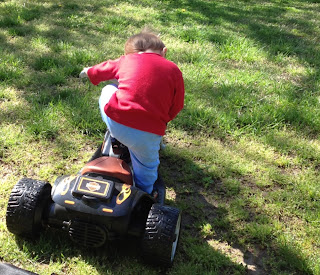 Jacob's back as he has his Chocolate Death dessert on the floor.
Well actually, all over the floor.
Ummmm Mommy 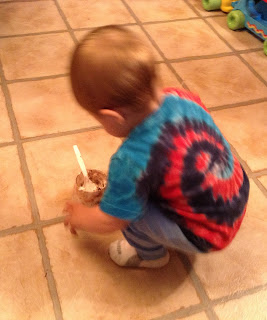 Jacob's back as he plays me a song on the piano.  He's a great musician. 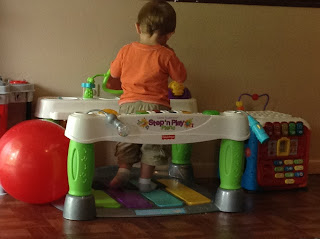 This one is very special.  These are the fat little hands that hold my cheeks
and say "mommie wuv" and my heart just melts. 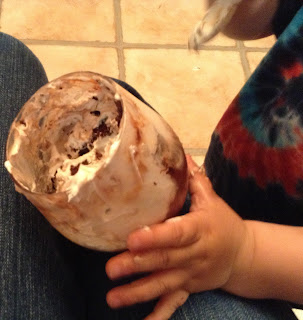 Who knew, The man of my dreams is 2 foot tall and AMAZING.
My Jacob
and I did tell you he hates having his photo taken.
I wasn't kidding.