Why I Love “Elf on the Shelf” (Guest Post)

For those who don’t know, “The Elf on the Shelf” is a children’s book written by Carol Aebersold and daughter Chanda Bell.  It was written in 2005 and it began a Christmas tradition in many families.  Families get to read the book, name their elf and get to see the fun things the elf does the next morning while the household is asleep.  No, the elf doesn’t move on its own but parents get to be creative and station the elf’s actions.

The elf “watches” the children during the day to report back to Santa.  Each night, the children believe that the elf returns to the North Pole to tell Santa if they have been naughty or nice.  The rules are that only adults can move the elf the next morning.  If a child touches the elf, the elf loses the Christmas magic and will not return.  There is even a movie that does a beautiful job of showing redemption in this story.

This cute little fellow has been getting some criticism this year and I’m not sure why.  Again, parents get to dictate the elf’s actions.  The elf’s face does look mischievous but he doesn’t have to be.  My sister-in-law found a great idea last year and had her elf read to my niece and nephews’ teddy bears.  My husband made a Christmas tree and presents out of Play doh where it looked like the elf made the items for our sons.  Our elf even had an epic pirate adventure with our sons’ toys and one night he turned the milk green! (My sons wanted “elf milk” for about a month after Christmas had ended last year!)

“The Elf on the Shelf” is meant to be fun and a family experience to share.  Many people search Pinterest and the Internet for the latest and greatest adventures their elf can get into.  It brings joy to children’s faces the next morning when they have to find the elf.
Childhood is a time for laughter and delight.  Christmas is magical all by itself.  People become friendlier and there is good food to be shared among family and friends as we celebrate the birth of Jesus.

Some people don’t do Santa because they may feel it loses focus on the reason as to why we celebrate at Christmas.  I think it is all a matter of what parents teach their children.  If a child knows that Jesus is in their heart and their Savior, I don’t see why there is a big deal with Santa and his helpful elf.  I do respect others ways of parenting though as I wouldn’t want my own parenting skills critiqued.

I grew up not knowing enough about the Lord.   I remember being devastated when I found out the truth about Santa but there is something that my mother remembers to this day that I said.  I was the oldest child so she explained to me that I had to keep it a secret for my younger siblings but I asked her if it was okay if I could still believe.

Christmas is about hope, faith and believing.  Children are full of imagination and I feel like this little elf brings the imagination back to us as adults and parents.
Our elf arrives the day after Thanksgiving and departs on Christmas Eve.
What special traditions do you and your children do at Christmas?  If you have an Elf on the Shelf, what did you name yours?  Our elf is Chippey, just like in the movie based on the book!  Many Christmas blessings to you and your family and a Happy New Year!
Blessings,
Kelly 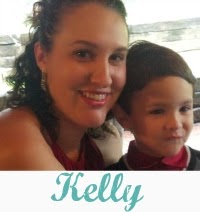